What is conversion therapy?

Conversion therapy is a practice that targets the 2SLGBTQIA+ community, especially youths. The goal of this “therapy” is to change a person’s sexual orientation to heterosexual or change their gender identity to cisgender (the gender that they were assigned at birth, according to their biological sex). It is a dangerous and discredited practice that has been rejected by the majority of mainstream medical and mental health organizations for decades. However, due to continued discrimination and social bias against 2SLGBTQIA+ people, it still happens around the world.

What are the effects of conversion therapy?

Conversion therapy has been shown to have harmful psychological effects on 2SLGBTQIA+ individuals and the community at large. These effects include possible contemplations of suicide, substance abuse, depression, difficulty sustaining relationships, and sexual dysfunction. These long-lasting effects can remain with a victim even if the “conversion” was unsuccessful. No person should ever be made to feel that the way they identify is not right, nor should they ever be forced to change their identity.

Though conversion therapy may not always be coerced, a 2019 survey found that a third of the people who have undergone the therapy globally chose to, while two-thirds were coerced. Conversion therapy as a practice that is promoted by some communities may make a person feel that they need to engage with the therapy as the ‘right’ thing to do, which can be incredibly harmful to the individuals mental health. The therapy may be presented to a person as their only way to remain in their community or maintain relationships with family.

Conversion therapy does not work because it is based on the outdated idea that being 2SLGBTQIA+ is a mental illness that needs curing. The science behind this practice overwhelmingly shows, aside from painful psychological effects, that it does not even work. Of 13 studies, 12 concluded that conversion therapy is both ineffective and harmful, and the one remaining study suggested success that was based on self-reporting. The World Health Organization and the United Nations openly discredit and oppose the practice of conversion therapy. Not surprisingly, some former practitioners of conversion therapy have in recent years come forward to admit that there is no merit to the practice.

In Canada, some provinces and territories have already passed legislation to protect 2SLBGTQIA+ members of the community from conversion therapy: Ontario, Manitoba, Nova Scotia, Prince Edward Island, Quebec, and the Yukon have all banned the practice in some way, mostly by making it illegal for conversion therapy to be offered to minors, unless they are capable of consent.

These reforms in criminal law are an important step towards protecting 2SLGBTQIA+ persons and promoting their rights. However, more needs to be done to help the global 2SLGBTQIA+ community globally. The harm of conversion therapy to people, especially adolescents, has attracted the attention of governments all over the world. Conversion therapy is now banned in countries such as Argentina, Brazil, Germany, Switzerland, and Samoa, along with others. However, there are still many governments around the world that have not yet acted to protect their 2SLGBTQIA+ communities. This map shows countries around the world that have passed legislation regarding conversion therapy. As you can see, there are many countries which have yet to introduce any legislation on the topic. 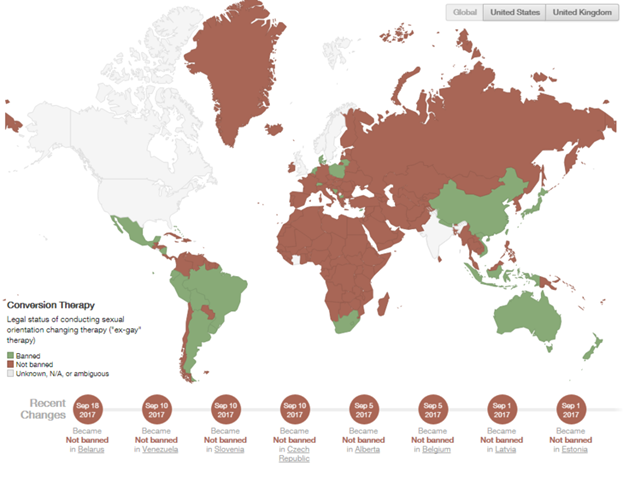 How can you help?

Bill C-6 will be debated in parliament soon. Your members of parliament need to know that this Bill is crucial to ensuring protection for 2SLGBTQIA+ Canadians. We encourage you to join letter writing campaigns, like the one started by Windsor Essex Transgender and Allied Support. W.E. Trans Support is an amazing community organization which has provided a great example of a letter that you can send to your local member of parliament to show support for Bill C6.

You don’t have to be a member of the 2SLGBTQIA+ community to support our issues, and talking with your family and friends about the dangers of conversion therapy and the importance of this bill is a significant way to support our community. We also encourage you to watch films such as Boy Erased (2018), which is based on a real-life experience of undergoing conversion therapy.