Gender is a
large part of language; both obvious and subconscious. Our social scripts have
become so intertwined with gendered language[1]
that the way we view gender is mirrored through our words and actions.
Therefore, to invalidate someone’s gender identity is to deny them a
significant part of themselves.

Using
someone’s correct pronouns is a way to respect them and create an inclusive
environment. As instructors, we have the power to make our communities feel
empowered and safe through educating ourselves.

[1] the social assignment or designation of a person’s gender, usually on the basis of perceived sex.

Pronouns are words that refer to a person without using their name. When referring to a person, we use personal pronouns. The most common pronouns you are likely to encounter are:

It is important to note that while these are the more common pronouns, there are many other pronouns, such as neo-pronouns that a person may decide to go by, ie. ne/nem/nir . As instructors, we have a responsibility to make our students feel safe, valued, and respected. Whichever set(s) of pronouns a student uses should be used consistently.

how do i ask someone what their pronouns are?

It might feel uncomfortable or invasive to ask someone what their pronouns are directly. The easiest way to ask someone what their pronouns are – without asking them directly – is to share your own! There are many ways pronouns can be shared. For example, a direct introduction at the beginning of class (e.g., “Hello, my name is Fei and I go by she/they pronouns”). There are also many ways to share your pronouns online. This may look like adding pronouns in your Zoom name or in your e-mail signature.

In opening the conversation with your pronouns, you are signaling to the other person that you are familiar with the concept of pronouns. Additionally, you indicate that you are a safe person to communicate with, particularly among members of the LGBTQ+ community. This is also an excellent way to normalize pronouns in a normal conversation among other students.

Gender normativity1 is a barrier to self-expression. The words “he” or “she” feel limiting to many. Pronouns are often exclusively assigned to a social set of expectations about how someone should express their identity and relate to the world. The act of assuming (even if correct) sends a potentially harmful message – that people must look a certain way to demonstrate the gender that they are or are not. Many students who do not identify as male or female do not feel comfortable using the gendered pronouns found in many languages. Additionally, giving students the opportunity to self-identify the names and pronouns that they use in the classroom benefits all students, including international students and students who use their middle name as their primary name. While gender-neutral pronouns are often used by genderqueer & gender-non-conforming people, you do not have to identify that way to use them. Using gender-neutral pronouns as default then addressing someone that you do not know is a good way to normalize using such pronouns. It would make the conversation more inclusive, as well as avoiding making the other person uncomfortable.

You don’t have to be queer to self-identify! Cisgender allies can help normalize the behaviours of self-identifying to avoid misgendering. Do this by: 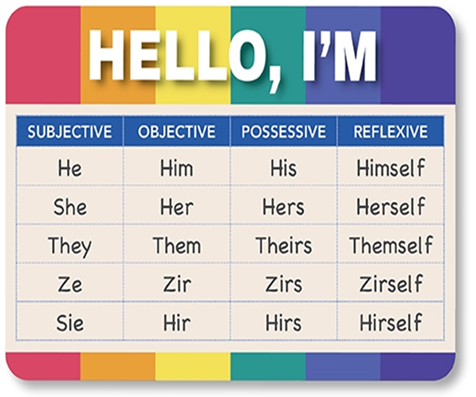 There are many different gender identities to help identify a student’s experiences. However, pronouns are a complex label and do not always equal gender. For example, some people who identify as females still prefer to use, they/them pronouns as a form of self-expression. What is important is communication; simply asking or using the previous methods will avoid confusion. The most common gender identity terms you will find are:

Agender – someone with little to no connection with the gender binary; someone with no personal alignment to male or female; and/or someone who sees themselves as existing without a gender.

Cisgender (Cis) – people whose current sex/gender aligns with what was externally assigned at birth. Essentially: if someone is not transgender, they are cisgender. The term cisgender is a respectful way of distinguishing the difference between transgender people and non-transgender people without stripping anyone of their rights or validity.

Gender Binary – the Gender Binary is an institutional system, and is the classification of gender into two distinct, opposite forms: “masculine” or “male”, and “feminine” or “female”. The Gender Binary rewards conformity – not creativity, and is upheld by a system of power and hierarchy. The particular Gender Binary that currently dominates Western society is related to historic and ongoing colonization, and is linked to white supremacy, influenced by religious colonizers. The Gender Binary is also a tool of the patriarchal state, and is socially constructed based on misogynistic and sexist stereotypes and beliefs about gender.

Gender Fluid – a person whose gender fluctuates over a period of time (as short as hours, days, weeks, or as long as months).

Genderqueer – a term used by individuals who do not identify as male or female.

Intersex – the term intersex is an umbrella term that refers to people who have one or more of a range of variations in sex characteristics that fall outside of traditional concepts of male or female bodies.

Nonbinary (Enby) – a person who does not identify as part of the gender binary.

Sex Assigned at Birth – a medical term used to classify an individual’s sex as “female”, “male”, or “intersex”. Essentially, when a baby is born, the doctors take a look at external genitalia and announce: “it’s a boy!” “it’s a girl!” or, “we’re not sure.”

Transgender (Trans) – a term used to refer to a person whose current sex/gender is different than the one externally assigned at birth.  Trans is also often used as an umbrella term for all those who do not identify as cisgender.

Two-Spirit (2S) – an umbrella term used within Indigenous communities to recognize individuals who possess qualities or fulfill roles of both feminine and masculine genders. Only Indigenous people can use this term – you cannot self-identify as two-spirit.

[Definitions are derived from https://www.transwellness.ca/glossary-of-terms] 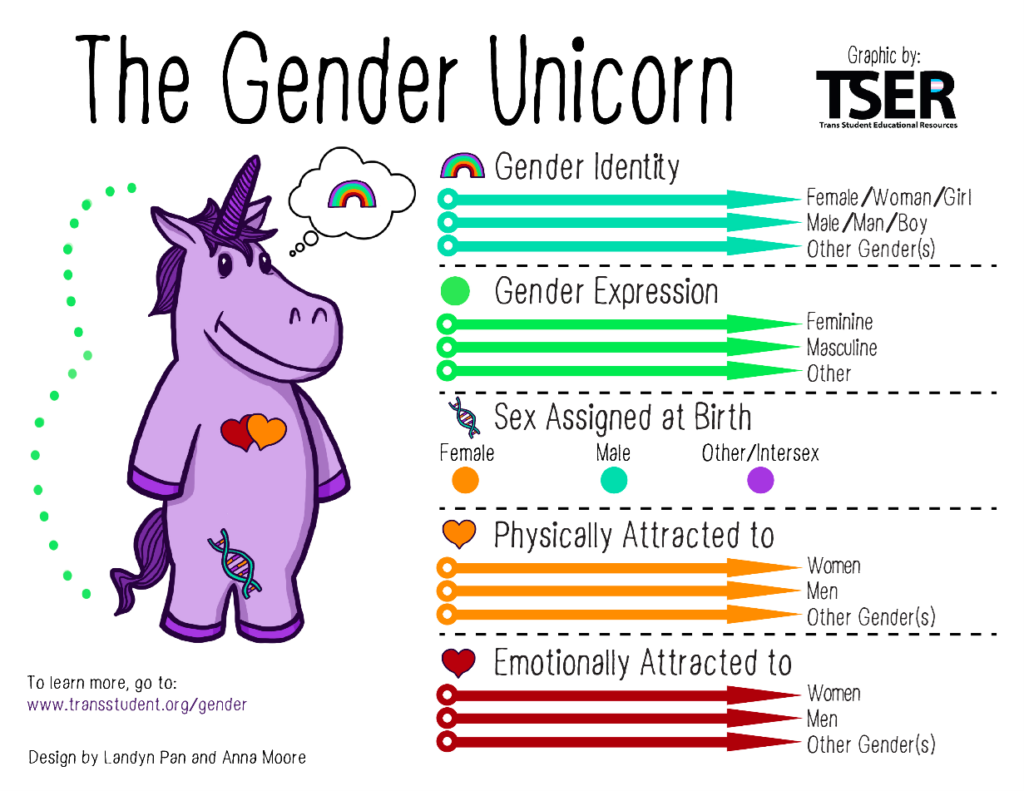 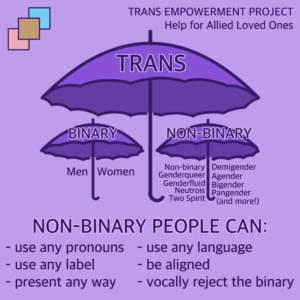 what do i do if i make a mistake regarding someone's pronouns?

First, remember that the conversation is not about you! If you use the wrong pronouns for someone and you immediately recognize your mistake: apologize, correct yourself, and move on with the conversation.

Over-the-top apologizing creates unnecessary attention to the mistake and can cause the other person to feel uncomfortable. Simply acknowledge the mistake, try to avoid it in the future and move on.

If you hear someone else using incorrect pronouns for another person, and you already know that the person who has been misgendered wants people to be corrected, casually affirm the correct pronouns in your own speech and correct the person privately later. Bring it up in the moment only if you have been given permission. Sometimes, pointing out that someone made a mistake can gain shift unwarranted/embarrassing attention to the person. 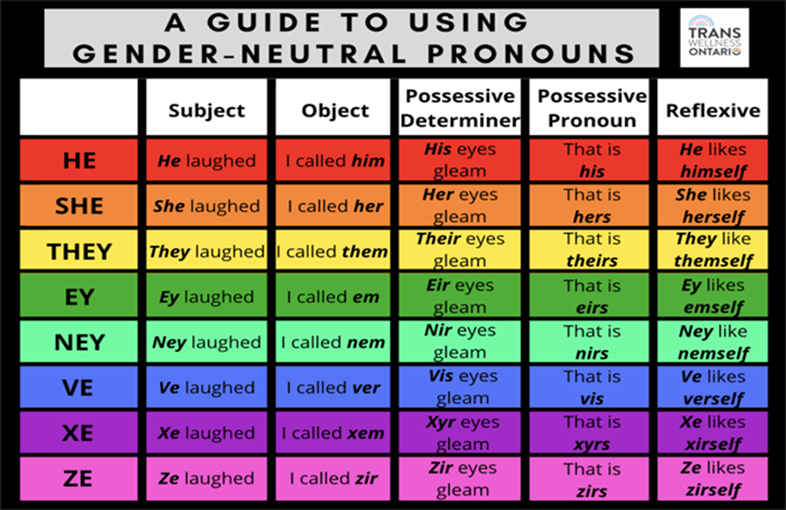 why should i refer to a student by the pronouns that they use?

Simply put, it is a matter of respect. The concept of gender is as expansive as ever. Traditionally, in a post-colonial western society, many people view gender as a binary system, with people being either male or female. But as time progresses, a growing population of students – as well as staff and administration – now identify as non-binary or transgender. Some may use the terms genderqueer or genderfluid to describe their identity. Their names and appearance may also be gender-neutral and may not conform to traditional conventional gender expectations. For these students and faculty, it would create a sense of inclusion and comfort for others to use their preferred pronouns.

how can i, as an instructor, incorporate pronouns in my classroom?

As a staff member in any office, use inclusive language until you know how people refer to themselves. Introduce yourself using pronouns to make the student comfortable in sharing their own name and pronouns. This will help make the conversation inclusive from the start.  University should be a safe and inclusive space for all students and your actions will create a better campus for all our students. Teachers may add it to their email signatures, zoom names in synchronous classes, or add it in steps in an introduction post asking (if one is comfortable) to share their name and pronouns as well. Students can have their pronouns included in any place where they require the name, as when students ask questions or during a class format, they can set the precedent that when one asks a  question, or answers, one can respond with their preferred name and pronouns every time, as a sign of recognition that pronouns can change daily and are not a once-a-year check-up.